This last part of our tutorial on how to implement a neural network, generalizes the single layer feedforward neural network into any number of layers. The concepts of a linear projection via matrix multiplication and non-linear transformation will be generalized. The usage of the generalization will be illustrated by building a small feedforward network that consists of two hidden layers to classify handwritten digits. This network will be trained by stochastic gradient descent , a popular variant of gradient descent that updates the parameters each step on only a subset of the parameters.

This part will cover:

This is the last part of a 5-part tutorial on how to implement neural networks from scratch in Python:

The notebook starts out with importing the libraries we need:

The dataset used in this tutorial is the digits dataset provided by scikit-learn . This dataset consists of 1797 8x8 images of handwritten digits between 0 and 9. Each 8x8 pixel image is provided as a flattened input vector of 64 variables. Example images for each digit are shown below. Note that this dataset is different from the larger and more famous MNIST dataset. The smaller dataset from scikit-learn was chosen to minimize training time for this tutorial. Feel free to experiment and adapt this tutorial to classify the MNIST digits.

The dataset will be split into:

Generalization of the layers

Part 4 of this tutorial series took on the classical view of neural networks where each layer consists of a linear transformation by a matrix multiplication and vector addition followed by a non-linear function.
Here the linear transformation is split from the non-linear function and each is abstracted into its own layer. This has the benefit that the forward and backward step of each layer can easily be calculated separately.

Each layer can compute its output in the forward step with get_output , which can then be used as the input for the next layer. The gradient at the input of each layer in the backpropagation step can be computed with get_input_grad . This function computes the gradient with the help of the targets if it's the last layer, or the gradients at its outputs (gradients at input of next layer) if it's an intermediate layer. Each layer has the option to iterate over the parameters (if any) with get_params_iter , and get the gradients of these parameters in the same order with get_params_grad .

The following sections will refer to a layer as a layer defined above, and hidden-layer or output-layer as the classical neural network view of a linear transformation followed by a non-linear function.

The sample model used to classify the handwritten digits in this tutorial consists of two hidden-layers with logistic functions and a softmax output-layer. The fist hidden-layer takes a vector of 64 pixel values and transforms them to a vector of 20 values. The second hidden-layer projects the previous 20 values to 20 new values. The output-layer outputs probabilities for the 10 possible classes. This architecture is illustrated in the following figure (biases are not shown to keep figure clean). 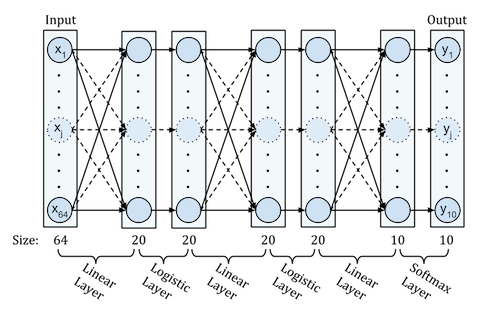 The full network is represented as a sequential list where each next layer is added on top of the previous layer by putting it in the next position in the list. The first layer is at position 0 in this list, the last layer is at the last index of this list.

The details of how backpropagation works in the forward and backward step of vectorized model are explained in part 4 of this tutorial. This section will only illustrate how to perform backpropagation over any number of layers with the generalized model described here.

The forward steps are computed by the forward_step method defined below. This method iteratively computes the outputs of each layer and feeds it as input to the next layer until the last layer. Each layer's output is computed by calling the get_output method. These output activations are stored in the activations list.

As in part 4 of this tutorial the gradient computed by backpropagation is compared with the numerical gradient to assert that there are no bugs in the code to compute the gradients.

This tutorial uses a variant of gradient descent called Stochastic gradient descent (SGD) to optimize the cost function. SGD follows the negative gradient of the cost function on subsets of the total training set. This has a few benefits: One of them is that the training time on large datasets can be reduced because the matrix of samples is much smaller during each sub-iteration and the gradients can be computed faster and with less memory. Another benefit is that computing the cost function on subsets results in noise, i.e. each subset will give a different cost depending on the samples. This will result in noisy (stochastic) gradient updates which might be able to push the gradient descent out of local minima. These, and other, benefits contribute to the popularity of SGD on training large scale machine learning methods such as neural networks.

The cost function needs to be independent of the number of input samples because the size of the subsets used during SGD can vary. This is why the mean squared error (MSE) cost function is used instead of just the squared error. Using the mean instead of the sum is reflected in the gradient and cost computed by the softmax layer being divided by the number of input samples.

Performance on the test set

The results can be analyzed in more detail with the help of a confusion table . This table shows how many samples of which class are classified as one of the possible classes. The confusion table is shown in the figure below. It is computed by the scikit-learn confusion_matrix method.
Notice that the digit '8' is misclassified five times, two times as '2', two times as '5', and one time as '9'.

This was the last part of a 5-part tutorial on how to implement neural networks from scratch in Python: